03/05/18: We design visual identity to promote play by Owen Sheers

22/03/18: Voices from the Deep is installed at The Postal Museum

07/07/17: We win exhibition design project for The Postal Museum

18/05/14: Nick Bell giving talk at University of the Arts London

20/02/11: Great North Museum for European Museum of the Year

04/12/10: Atmosphere opens at the Science Museum in London

21/11/10: Full museum accreditation for Museum of the Post Office

05/07/10: Zooid Pictures brought on board for Climate Science

We are visual communicators designing for three dimensional interactive environments.

Most of the time –
we work with architects, curators and museum directors. Together, we try to make museums absorbing and inspirational places to be.

Some of the time –
we work with heads of marketing and communications. With them, we help hone the voice that best captures their organisation’s relationship with people.

Occasionally –
working with publishers, editors and writers, we make books, catalogues and magazines objects of beauty and substance.

During that time –
we have developed a visitor-centred editorial concern for the voices and visual language of interpretation and interactivity within physical information-rich environments.

How we do it

By always aiming to  –
make it easier and more appealing for people to strengthen the connections they have with an organisation (in our case, usually museums and visitor attractions).

By always striving to –
deepen this affinity by developing ways of communicating that spark interest, encourage participation and provoke action.

We fuel action by –
making visitor engagement tangible and intelligible through building distinctive graphic identities specific to the content each attraction offers and that serve the experiences to be had there .

These identities are –
interactive, interpretive, communication strategies played out through the design of exhibition graphics, digital interactive/audio visual media, networked media and wayfinding.

These strategies are –
cross-platform, conceived with every visitor's own experience and personal connections to the content in mind – and increasingly will be making heavy use of the content visitors bring with them.

Nick is an editorial designer who has spent the last 18 years collaborating with architects, curators and museum directors on exhibition design projects. During that time he has developed a visitor-centred editorial concern for the visual language and voice of interpretation and interactivity within social, information-rich, highly distracting, narrative environments such as museums. Prior to this, Nick was Creative Director of Eye, magazine, the collectable and critical graphic design journal.He is an experienced educator, occasional writer, speaker, Special Consultant to Eye and member of AGI (Alliance Graphique Internationale). From 2013 to 2016 he was UAL Chair Professor of Communication Design where he co-founded Early Lab, and partnered with Ezio Manzini on his Cultures of Resilience meta-project. Early Lab is a design for social innovation practice currently working with NHS researchers in youth mental health. Inspired by his work with Early Lab and the notion of a museum as an environment and practice for wellbeing, Nick is currently researching the use of design as part of a situated, place-based strategy for mental health prevention at the Royal College of Art, London. Drawing on thirty years of experience as a designer, Nick provides creative guidance and collaborative leadership to our team, our client’s teams, our project partners and their teams. He has responsibility for entrepreneurial/editorial/ creative vision and for maintaining the quality of our output with a view to achieving the desired outcomes.

David leads exhibition graphic design, environmental design and wayfinding projects. He is involved in projects from conception through to completion, working with clients to define scope and content as well as with contractors on details and finishing. He manages both creative output and project programming. With over 12 years experience in this field, his career started at Ralph Appelbaum Associates (RAA) before joining Nick Bell Design in 2007. In 2012 David relocated to Manchester but continues to work with Nick Bell Design on special projects for the museums and heritage sector. Notable career achievements include the award-winning permanent galleries at the London Transport Museum (for RAA, 2007) and the Great North Museum (for Nick Bell Design, in collaboration with Casson Mann, 2010), awarded Gold in the DBA Design Effectiveness Awards, 2011. David has worked for a range of clients including English Heritage, V&A, Science Museum, National Trust, The Greenwich Foundation, Wellcome Trust and IWM. He was an Associate Lecturer in Graphic Design at the London College of Communication (2004-8) and a Visiting Tutor at the University of Applied Arts in Vienna (2007). Born in London, David studied graphic design at the London College of Printing and communication design at the Royal College of Art.

Telli is a graphic designer bringing experience in cross-disciplinary approaches applied to environmental design. She provides senior design support encompassing architectural graphics, branded environments, signage and wayfinding systems. She has been collaborating with Nick Bell Design since 2014. Over the years, Telli has worked on major international projects for leading design practices including Speirs + Major, Foster + Partners and OMA. Her history of collaboration with architects, urban, interior and lighting designers has provided her with an all-round understanding of the built environment and is evidence of her expertise in the integration of two-dimensional communication design with architectural space. Notable projects with Nick Bell Design include interior graphics for the global headquarters of a leading FTSE-listed company in London. Collaborations with others include London 2012 Olympics Lighting Strategy, wayfinding for Astana Expo 2017 in Kazakhstan, wayfinding and information graphics for Orbital Highway in Qatar, signage for Eastland Shopping Centre in Australia. She has an MA in Graphic Design from the London College of Communication. Previous to this she spent five years in professional practice in her hometown of Tehran in Iran.

Julie manages the contractual and financial aspect of all of our projects as well as assisting with client management and liaison. Internally she also oversees the resourcing of projects and other organisational and administrative aspects of the day to day running of Nick Bell Design. She joined us in 2006 to oversee the Finance, HR, Legal/Commercial and Administration aspects of the company. Her experience equips her with knowledge of the business and the skills for communicating well with people both internal and external to the company. Julie keeps our projects and working relationships on track. She has a musical background as a performing/recording artist, following which she worked for six years within the cultural sector of the design industry in both administration and PR roles. Most of this time was spent working for Casson Mann, the museum and gallery exhibition designers, with whom we have collaborated regularly for many years. Born near Southend in 1968, Julie lives in central London with her husband and their three children. Her passions are still music, (writing, recording and live performance) being outdoors, people and connecting with communities.

All of our work is heavily dependent on interdisciplinary collaboration to succeed – especially our environmental design. Our long-established and growing network of collaborators gives us access to the best and most appropriate expertise, insight, talent and support out there. This is a list of the highly valued project partners we have had the pleasure to work with and the projects we worked together on.

Coombe Architecture: architects and exhibition designers
– This Was Tomorrow
– Posh
– The Heart
– Museum of the Post Office in the Community

Made by Many: social media experts
– Manchester United
– Amnesty’s protectthehuman.com

The 2006 Council of Europe Museum Prize
for Churchill Museum

The THEA Award for Outstanding Achievement
for Churchill Museum Lifeline

Che Guevara at the V&A

The Heart for the Wellcome Trust

Voices from the Deep at The Postal Museum

Churchill Lifeline for the Churchill Museum

Churchill Projections for the Churchill Museum

When we write something worth sharing we post a link to it here.

Can graphic design save your life?

Find us using the route on the map below, or an alternative route is from the Regent's Canal towpath. We are in a building behind the Proud East event space. Once through the grey metal gate look for the door labelled 'Commercial Units C-P'. We are in Unit F. 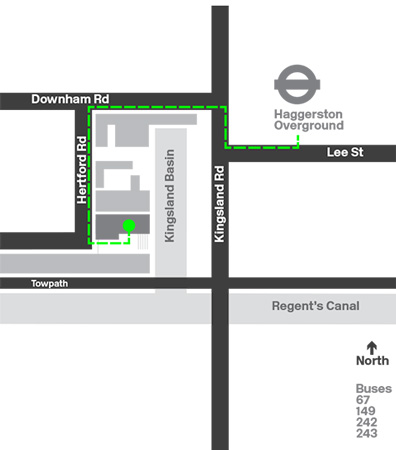 We work with specialists from many fields on every single project. The multi-media and environmental nature of our work demands it. Are you an architecture practice, 3D design studio or digital/interactive agency? We are always interested to hear from you. We team up frequently to make joint contributions to tender returns that are regularly successful. Find quite a few of your competitors listed on our site under ‘Collaborators’ here. To arrange a meeting, call us or email Nick Bell.

Are you a talented graphic designer with a passion for typography wedded to a keen interest in audio-visual media and digital interaction within physical environments? If so, we would love to hear from you. We might not have anything to offer you at the time but don't let that stop you. Pdf samplers with CVs no larger than 10mb should be emailed to Julie Riley.

You are currently using an older browser that can only display a basic version of this website.
Please upgrade or use an alternate browser to see the full version.